Through the windows of the car, a beautiful animated picture scrolls. Dressed coniferous snow succeed indefinitely, as a long parade. We drive to the north, towards Chibougamau, and cross the Ashuapmushuan Wildlife Reserve. It’s our friend that Julie invited us, Olivier and me, to a promising ice fishing weekend, snowshoeing excursion and Sunday brunch. It’s been so long that she begs us to visit her « Jamésie »!

« Jamésie », I love that word, says simply Olivier, mesmerized by these green and white ghosts that show us the way. “There’s something alive in this word, something that goes beyond the borders …”. The words « Gaspésie » and « Iroquoisie » then come to our mind. It does not take more to put us back in our epic conversations tank when the world is remade, juggle our ideas … and our projects. We are looking at that time for the title of the next film.

And it is there, lost in the middle of the spruces, that the idea came to us. QUÉBÉCOISIE. “Wow! It can only be that!”. One of us, because we must admit that spending so much time together, we do not always know where comes from the ideas, from a bit of us two I guess… So one of us said: “In all its poetry, it looks like that word, Québécoisie, refers to an area where the borders become blurred, vague, a space … rather apolitical. A word which echoes to a huge area where animals run, where the rivers flow and where many people live together…”. (…) “Yeah… Québécoisie, that’s exactly the word we need to reflect this dream that these people who cohabit will want to waltz together again.”

An utopian Québécoisie you might say, but a Québécoisie that has the potential to exist. Arriving at our friend’s place, we jump on the computer to see if Québécoisie is a “new word” or if it already exists. We fall on Pierre Perrault, one of Quebec’s greatest poets filmmakers who, like many, we draw heavily. It seems that he would have used that word a few times.

But Québécoisie with a “c” gives us the idea of the current QuebeC. While the film we offer dreams of something else… Then we think Kébékoisie or Kébécoisie with a “K” at the beginning. But Kebec refers to this time in the early days of the colony. The origin of the word is still debated today. For some, it is Champlain, while sailing on the St. Lawrence River, that have heard the Algonquins using that word meaning “where the river narrows” (in speaking of the place where he founded later in Quebec City). For others, this word is rather Micmac. When Champlain arrived near the coast, he met Mi’kmaq who invited him to get off his boat chanting «Kepec»! (Get off!).

Then we thought that there was something to be reinvented. Or rather to find. After many tergiversassions, we agree to write QUÉBÉKOISIE with a K in the center. To bring Aboriginal consonance. A «K» which repositions the balance, such a pillar. 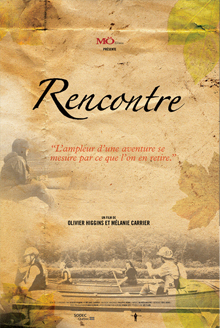